CHINAR International, according to a statement, will provide seed capital, mentorship, and incubation facilities under its ‘Small Business Support Project’.

The project aims to support 10 youth with a seed capital of up to Rs 1.5 lakh each with preference to candidates from low-income groups.

A candidate must be in the age group of 18-35 years with a minimum qualification of 10 pass.

CHINAR International is an apolitical and non-religious organisation with a mission to empower orphans, vulnerable children, and marginalized youth in conflict areas through quality education and socio-economic initiatives. Srinagar, May 30: Sher-e-Kashmir University of Agricultural Sciences and Technology of Kashmir Monday held a digital marketing boot camp for the student innovators and startups of the university.

The daylong intensive boot camp was held by the university’s IDP Cell under the World Bank-ICAR funded National Agricultural Higher Education Project for the institutional development of SKUAST-K.

More than 50 student innovators and startup imitators of SKUAST-K participated in the workshop, who were trained about various aspects of digital marketing across various online platforms.

The workshop was conducted by renowned entrepreneurship development and digital marketing expert Dr Vikas Rajput. He held hands-on training for the students and made them aware with practical examples about digital marketing using various social media platforms like Facebook, Instagram, Twitter, Google etc.

He guided students with step-by-step procedures for online marketing, ad creation and content writing for successful media campaigns for various products and services.

Dr Divya Rajput, an adjunct faculty at SKUAST-K and a startup and incubation expert working with government institutions and corporate houses across the country also held a session.

OSD to Vice Chancellor, Prof Azmat Alam Khan, who presided over the function, talked about various initiatives for creating a successful innovation and startup ecosystem at the university.

Dr Naveed Hamid Bhat of the IDP conducted the proceedings of the workshop. 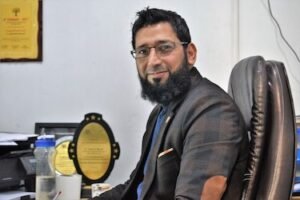 Another member of Sher-e-Kashmir University of Agricultural Sciences and Technology of Kashmir Dr Khalid Z Masoodi, Assistant Professor at the Division of Plant Biotechnology, has won a consolation prize of Rs 10,000 under ‘Best Local Resource Relevant Project’ for his idea of anti-cancer food from a local underutilized crop.

Vice-Chancellor Prof Nazir Ahmad Ganai congratulated Ahmer Bashir and Dr Khalid Masoodi for bringing laurels to SKUAST-K. He said to make SKUAST-K the best innovation university in the country, every possible step is being taken to create an enabling environment for entrepreneurship and startup creation at the university.

Ahmer Bashir, mentored by the IDP-NAHEP team of the university, has won many awards, previously as well, for his idea to solve the poor solid waste management problem in the country, particularly keratinous wastes, including human hair, which are the hardest protein and take more than 50 years to decompose naturally, making it an environmental concern. It took him several attempts to devise a method for converting all these keratinous wastes into an organic liquid that can be readily used as an NPK, mineral and micronutrient-rich fertilizer in Indian agricultural systems resulting in restricted use of toxic chemical inputs into soil.

Dr Masoodi has screened 25,000 medicinal plant extracts endogenous to Kashmir valley, resulting in the discovery of 16 new anticancer molecules against Prostate cancer and Lung cancer. SKIDDDL-1 was one of the molecules isolated from an underutilized crop TaxO that has been consumed for ages in Kashmir as a vegetable. Dr Masoodi and his Team designed a Magic food from this.

At the IIT Jammu competition, the second and third prizes have won by Harkeerat Kaur of Azad Identity Solution and Mansi Sharma of Manukrishi, respectively, for Rs 50,000 and Rs 25,000 cash prize.

To encourage entrepreneurship in J&K and Ladakh, IIT Jammu hosted the competition for startup ideas exclusively for the teams led by Higher Education and Research Institutes fraternity, including students, faculty, and staff in J&K and Ladakh. The programme was organised to acquaint the students with various concepts of innovation, startups and entrepreneurship.

The webinar was conducted by the university’s Faculty of Agriculture under the World Bank-ICAR funded National Agricultural Higher Education Project (NAHEP) for the institutional development of SKUAST-K.

Startup coach and Managing Partner of REIN Labs – Mumbai-based innovation, incubation and research organisation – Saurabh Sinha was the main expert of the webinar, who dwelled in detail about the transformation of an idea into a startup or business in particular reference with agriculture.

Sinha in his talk said that there is a need to invest in fundamental research and focus on innovation as growth levers. “We need to create products, services or solutions out of our innovations that solve global as well as our local problems,” he said.

He said students need to be oriented in a way that use their time during graduation doing projects, prototypes and products addressing real life social problems.

Besides the Faculty of Agriculture staff and team IDP-NAHEP, more than 90 students participated in the webinar.