Jammu, Dec 30: Prime Minister Narendra Modi Wednesday set a new deadline of August 15, 2022 for completion of Udhampur-Baramulla Rail Link, which will connect Kashmir valley with rest of India via railways for the first time.

“Underscoring the potential of the project (Udhampur-Baramulla Rail Link) to exponentially boost Kashmir’s tourism and economy, the Prime Minister fixed the deadline for completion of the project as August 15, 2022,” a spokesperson of the J&K Government said.

The prime minister, according the spokesperson, was chairing the 34th PRAGATI interaction with Union Secretaries of various Ministries and Chief Secretaries of states and UTs through video-conference.

The PM reviewed 11 projects related to seven Union Ministries including the prestigious Udhampur-Baramulla Rail link being constructed in Jammu & Kashmir.

While reviewing the progress of the Udhampur-Srinagar-Baramulla Rail, the Prime Minister was informed that all the issues have been resolved and works are progressing smoothly.

Earlier, the deadline for the completion of the rail project was December 2022 set by Northern Railways General Manager. 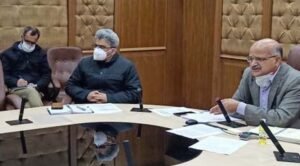 Chief Secretary, J&K, BVR Subrahmanyam along with Administrative Secretaries of departments of Health & Medical Education, and Jal Shakti participated in the video conference.

Reviewing the progress of Ayushman Bharat- Pradhan Mantri Jan Arogya Yojana (PMJAY) across the country, Prime Minister said that the scheme not only provides financial relief but also acts as a safety net to the underprivileged families which would earlier be pushed into poverty when befallen by serious illnesses.

Jammu and Kashmir has recently launched Ayushman Bharat- ‘Sehat’ and extended the free-of-cost and cashless healthcare benefits to all the residents of the Union Territory.

Prime Minister said that through the Jal Jeevan Mission- Har Ghar Nal Se Jal, every rural household in the country will be provided with a clean drinking water supply in adequate quantity by 2024. These efforts will lead to an improvement in living standards of rural communities and thereby must be taken up on mission-mode by all the states and UTs, he added.

It was informed that in Jammu and Kashmir, the mission has been completed in two districts and the rest will be completed by 2022.

GoI proposes to make front airbags mandatory in all cars ‘A developed city is not a place, where the poor have cars, it’s where the rich use public transportation’

The traffic situation in the city has turned into a complete mess. The number of vehicles is swelling day by day whereas most of the roads see no expansion, resulting in frequent jams and lots of inconvenience to the general public.

Srinagar, which has been categorised as one of the 53 metropolitans with its population touching about two million people, will be an only city without any functional public transport. The smart city tag, which often the administration adds to Srinagar, looks sham.

Government with tall claims to develop the city on ‘international lines’ and make it as one of the prime tourist locations in the global map is giving little attention to building the road network and proper transportation system, which is considered the nerve centre of any vibrant city. The most important components of a liveable and environmentally sustainable city is a properly designed, efficient and affordable public transport system.

But here whole public transportation system of the city has been left to the beck and call of few transport associations – mostly owning minibuses unfit for ferrying public – who run it on their will, without keeping public convenience in view. Government has handed over complete control of the city’s public transport to those who have no accountability to general public. And even the number of these ‘mini-buses’ is dwindling each year.

Srinagar is the only city, which does not run Road Transport vehicles for the public, except for few electric buses introduced a year or so ago. A huge RTC fleet is staying idle, which could otherwise ease people’s lives and earn some money as well.

There is no Transport Authority, to govern the city traffic, plan for the roads and make policies for public transportation system. Transport and road planning gets marred between more than half a dozen government departments and bodies including traffic police, SMC, Srinagar Development Authority, R&B etc.

There have been a number of studies saying that public transport is more sustainable, occupies less road space and causes less pollution per passenger than personal vehicles. Government has no reason for not running RTC buses on some of the city roads, if not all. A good public transport system will automatically ease out the traffic on roads, as a number of people will prefer cost-effective mass transit instead of their own vehicles.

The transport system of the city needs to be managed by a single agency, which can work on a public-private partnership basis. All the privately owned bus operators, who work under different association banners but are accountable to none, can comply with the agency for having a proper route and timing plan.

The metro rail project is a good step in the direction of the sustained public transport system for the Srinagar city, but one, it will take many years to become operational as the work is yet to commence. Second, the metro rail network will need to be aided with the well build bus network.

To see lesser traffic jams on Srinagar roads, make the size and number of the buses bigger. Banihal, Jan 3: The work on the Rs 2100-crore project started in June 2011 by Navyuga engineering company and on completion would reduce the road distance between Banihal in Jammu province and Qazigund in south Kashmir by 16 km from the present 35 km and will bypass Jawahar Tunnel and Shaitan Nalla, which is prone to heavy snowfall and slippery conditions during winters.

“The work within and outside is in the final stage and we are hopeful to throw it open for traffic in the last week of March,” Chief Manager, Navayuga Engineering Company, Muneeb Tak said here.

The existing road tunnel below the Banihal pass (Jawahar tunnel — the gateway to Kashmir) has been a bottleneck on the nearly 265-km highway, the only all weather road linking Kashmir with the rest of the country, due to its elevation of 2,194 m (7,198 ft) and limited traffic capacity.

The new tunnel”s average elevation at 1,790 m (5,870 ft) is 400 m lower than the existing Jawahar tunnel”s elevation, which would make it less prone to avalanches and fulfils the dream of the expressway between Srinagar and Banihal.

Tak said the tunnel is a masterpiece of engineering and has been constructed from Austrian tunnelling method (ATM).

“The tunnel has been built on the Build Operate and Transfer Base System with a state of the art exhaust system to remove gas and bring in the fresh air.”

He said 126 jet fans, 234 CCTV modern cameras and a firefighting system are being installed in both tubes of the tunnel for which the work is underway.

“A corridor between two tubes after every 500 meters inside the tunnel has been built and this can be used in case of any emergency in either tube,” Tak said.

The work on the tunnel was delayed for several reasons in the past 10 years and many deadlines were missed due to the unexpected land condition inside the tunnel, alleged financial crisis in the construction company and some issues related to local landlords and company workers, which led to a number of work shutdowns in the tunnel project. PTI