Srinagar, Jan 4: Jammu and Kashmir’s GST collection in December fell by 22% to Rs 318 crore from Rs 409 crore the same month a year ago, indicating reduction in business activities and slowing economy in the UT.

The December Goods and Services Tax (GST) collection also witnessed a 12% decline than November receipts of Rs 360 crore. December is the third consecutive month showing the decline in the GST figures. 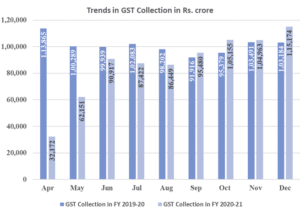 In contrary, the December tax collection at the all-India level witnessed an all-time high of Rs 1.15 lakh crore, a 12% hike on a year-on-year basis.

The biggest growth in the last 21 months and highest monthly revenue collection since the implementation of the ‘one nation, one tax’ in July 2017.

Jammu and Kashmir, along with Arunachal Pradesh, has been the worst performer with a 22% decline in December GST collection among the states and union territories with a legislature.

Belying the official claims that the business sentiment in J&K has started showing improvement, the decline in the GST collection reflects that state of economic activity is in dire straits.

The GST collection in the UT had also declined in November by 5% to Rs 360 crore, compared to Rs 377 crore in October same year.

Traditionally, the November and December months have an increased trade activity in the UT as residents start preparations for upcoming long winters. People store food items, buy winterwear and gadgets, and make other arrangements, particularly in Kashmir valley, as snow and rains often damage Srinagar-Jammu Highway frequently disconnecting Kashmir with rest of the world during the winters.

Despite, the tax collection for December and November declined after a marginal, though constant, increase in the previous three months, which government had claimed, an indication of business revival and growth in the Union Territory. 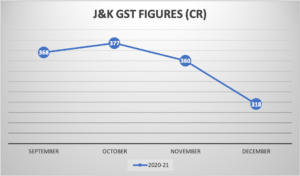 The GST collection for August, September and October has been Rs 326 crore, Rs 368 crore and Rs 377 crore respectively.

In November, J&K Government had said that after months of the economic slump due to COVID19 pandemic, the business in the UT had started showing improvement as indicated by the increase in GST collection.

“This has been made possible by the slew of measures taken by the government along with the economic relief package announced in the month of September 2020,” an official spokesperson had said, in a written statement.

“These steps (by the government) helped in boosting the business and the other ailing sectors that had suffered due to adverse impact of COVID-19 and had a positive impact on the growth of businesses in the Union Territory.”

The UT government in September last year announced a Rs 1350-crore package. It included 5% interest subvention on all types of business loans, 50% subsidy on fixed electricity charges for one year and waiver on water charges for six months, besides some other measures.

The November and December GST figures validate what the traders’ bodies and businessmen here constantly say that Kashmir economy is going through worst of the times. COVID19 pandemic has only worsened the ‘bad situation’ which was going on since 2014 floods and in between faced 2016 turmoil and lockdown imposed post-August 5, 2019.

Kashmir Chamber of Commerce and Industries (KCCI) recently, while asking for full implementation of the economic package, said the business community is in stress.

While urging the government to extend VAT amnesty scheme for another year, KCCI said the situation emerging after August 2019 onwards has gone from bad to worse due to the COVID-19 pandemic and the economy is worst hit due to the stress.

Attention J&K Govt employees, others: Important things you need to do before March 31 As we all know that March is the last month of a financial year, it provides a final chance to make various financial decisions in that particular year. Be it various legal compliances or taking benefit of various income tax saving schemes, March 31 is the last day. Though it is prudent to plan ahead your finances and other important tasks. But, if there is a chance left, one must not miss the last bus.
Important things you need to do before March 31:

KYC or Know Your Customer details are your credential for a bank or a financial institution. March 31 is the deadline for completing your KYC details with your account. To avoid any disruption in a transaction or get some important due to payment on hold, better to update your KYC ASAP. Submit copies of your documents like address proof, identity proof, PAN card at your bank branch.

Link your Aadhaar with PAN card

In case you have not filed your income tax return (ITR) for the financial year 2020-21 or assessment year 2021-2022, you have still a week to file it. Not filing your income tax return is considered tax evasion and will have consequences. From losing certain tax deduction benefits to facing penalty or imprisonment, one may have to face any of them or all depending on the severity. Also, make sure to verify your ITR after filing it. Otherwise, your ITR will be considered invalid. If your PAN card and Aadhaar is linked, you can e-verify your ITR within seconds.

As discussed earlier, it is important to plan your finances from the beginning of the financial year. However, better late than never. Therefore, make use of these remaining days of March and calculate your gross income for the current FY from different sources, like salary, income from a business, rent, saving etc. After ascertaining your total income, you can plan your taxation. You can choose the old tax regime or the new tax regime depending on which one suits you the best and benefits you the most. In the new tax regime, most of the exemptions and deductions cannot be availed. But, you will pay the income tax at a lower rate. However, in the old regime, a number of exemptions and deductions (more than 70) are available to save tax legally.

In case you decide to avail of the old tax regime, besides some standard deductions and exemptions, you can also make certain investments and saving plans to availa of a deduction of up to Rs 2 lakh under Section 80C. Your investment in the Public Provident Fund, National Pension Scheme, Sukanya Samriddhi Yojana, ELSS, fixed deposits and availing of life insurance will provide you with the tax-saving benefit. Similarly, availing of health insurance for your family and parents will provide you with additional tax benefits.

After computing, if your net salary is more than Rs 5 lakh, you should pay the advance tax if the liability is more than 10,000. In case you are a salaried employee, your employer should deduct TDS throughout the year in various instalments. Those people whose net income is less than Rs 5 lakh need not pay income tax. However, they too are required to file an ITR after March 31. In case the extra tax is paid or more TDS has happened, one can claim that back at the time of filing ITR.

No cess imposed on Kashmir apples in Union Budget 2021-22

Srinagar, Feb 1: A miss read budget announcement sent chill down the spine of Kashmir orchardists soon after Finance Minister Nirmala Sitharam proposed Agriculture Infrastructure and Development Cess on a number of commodities including apples. However, no cess has beeen imposed on Kashmir apples in Union Budget 2021-22.

Here is the story:

As some national news portals listed the names of the commodities and percentage of cess to be imposed on them, a number of people wrote Facebook and Twitter posts that 35% cess on apples will have a negative impact on the apple growers.

“The cess, which will be effect (sic) from February 2, will be charged at the rate of 35% on apples. This developed (sic) has sent shockwaves among apple growers of Kashmir,” wrote a Facebook page, which reports and discusses horticulture-related developments.

Misreading the bifurcation of the custom and agriculture cess on the apples, another, such page wrote, “While they have imposed 35% cess on apples, the customs duty has been reduced to 15% from 50%, which will prove double whammy for the local produce.”

However, the proposed cess on various commodities, the Finance Minister has meant, on the customs or excise duty imposed on the imported goods only. While she had not explicitly mentioned ‘imports’, news portals, particularly business news portals, also failed to explain it, which created confusion among the people, particularly the apple orchardists of Kashmir, who are not aware of the taxation jargon.

It was also missed by the people that no tax is imposed on any kind of agriculture goods produced within the country.

The new cess or AIDC introduced by the FM on a number of commodities including apples, liquor and fuel is imposed on imported goods only.

So this makes clear that no cess or any other tax has been imposed on the Kashmir apples.

In fact, the finance minister went ahead to explain that the AIDC won’t even affect the consumers.  “While applying the cess, we have taken care not to put additional burden on consumers on most items,” the FM said

Similarly, the 35% cess on apples has been imposed after reducing earlier 50% customs duty to just 15%.

AICD on other commodities:

Vehicles over 8 years old to be charged green tax Srinagar, Jan 25: Union Minister for Road Transport and Highways Nitin Gadkari has approved a proposal to levy a ‘Green Tax” on old vehicles which are polluting the environment.

The proposal will now go to the states for consultation before it is formally notified, MORTH said in a statement.

Transport vehicles older than 8 years could be charged Green Tax at the time of renewal of fitness certificate, at the rate of 10 to 25 % of road tax.

Personal vehicles to be charged Green Tax at the time of renewal of Registration Certification after 15 years.

Public transport vehicles, such as city buses, to be charged lower Green tax.

Differential tax, depending on fuel (petrol/diesel) and type of vehicle will be charged.

Vehicles used in farming, such as tractor, harvestor, tiller etc will be also exempted.

Revenue collected from the Green Tax to be kept in a separate account and used for tackling pollution, and for States to set up state-of-art facilities for emission monitoring.

MORTH said it Green Tax will dissuade people from using vehicles which damage the environment and motivate people to switch to newer, less polluting vehicles.

Green tax will reduce the pollution level, and make the polluter pay for pollution, it claimed.

The minister also approved the policy of deregistration and scrapping of vehicles owned by Government department and PSU, which are above 15 years in age. It is to be notified and will come into effect from April 1, 2022.