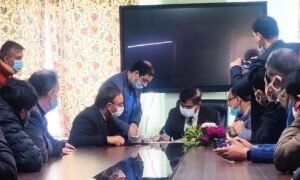 Ranked 49th at EoLI and Municipal Performance Index’ for 2020

Srinagar, March 4: Srinagar city has figured at the bottom of ‘Ease of Living Index (EoLI)-2020’ released by the Union Housing and Urban Affairs Ministry on Thursday. The poor performance on the index has made it the worst big city to live in the country with more than one million population.

Union MoS Urban and Housing Affairs Hardeep Singh Puri announced the release of the final rankings of Ease of Living Index (EoLI) 2020 and the Municipal Performance Index (MPI) 2020 in New Delhi on Thursday in an online event in presence of Durga Shanker Mishra, Secretary, MoHUA and senior officials of the ministry.

The Srinagar city has got the bottom rank, 49th, among the cities with a population of more than 1 million or 10 lakh people. It has scored 42.95 points out of 100 on the Ease of Living performance indicators, conducted by the Union Ministry of Housing and Urban Affairs since 2018 under its smart city project along with the Municipal Performance Index. Srinagar’s score is way behind the all-India aggregate 53.51 score of 111 cites. Srinagar has performed five points below Dhanbad, the second-worst city at the 48th rank with 46.96 score.

The Ease of Living (EOL) Index has been formed to measure the outcomes of the various programmes and schemes launched by the centre to verify whether these interventions were effective in ushering development in urban areas.

The Ease of Living Index is an assessment tool that evaluates the quality of life and the impact of various initiatives for urban development. The EoLI evaluates the well- being of citizens in 111 cities, which comprises cities identified under the Smart Cities Mission, capital cities and cities with a population of over 1 million. As a data-driven evaluation tool that quantifies the performance of cities across several parameters, the index also serves to empower cities to use evidence-based planning and implementation, write the authors of the EoLI report in its preface.

It provides a comprehensive understanding of participating cities across the country based on the quality of life, economic-ability of a city, and its sustainability and resilience. The assessment also incorporates the residents’ view on the services provided by city administration through a Citizen Perception Survey, as per the authors.

Srinagar has performed terribly in almost all indicators of EoLI, except for the Peoples’ Perception Survey. There is not a single Indicator or Pillar, where it has shown better performance than any other city among the 111 indexed. In the Quality of Life’ indicator, Srinagar has got 26.06 points. In the ‘Economic Ability’ indicator, it has got only 3.09 points, which indicates the lack of business opportunities and poor economic scenario of the city. In ‘Sustainability’ and ‘Ease of Living’, the score is 57.61 and 21.11 respectively. Citizen Perception is the only indicator, where Srinagar has shown better performance with a 72.80 score.

The MPI examines the sectoral performance of 111 municipalities of the country across five verticals which comprise of 20 sectors and 100 indicators. The five verticals under MPI are Services, Finance, Policy, Technology and Governance.

In the Municipal Performance Index, Srinagar’s score is even worst with 25.93 points out of 100 among the big cities with a million-plus population. In the ‘Governance’ indicator of MPI, Srinagar has scored 20.83 points. In Technology, it has scored 9.03. In services and finance, it has scored 27.02 and 33.45 respectively. For ‘Planning’ , the score is a little better with 37.40 points.

The MPI, according to the MHUA, was launched as an accompaniment to the EoLI. It seeks to examine local government practice in municipalities across areas of services, finance, policy, technology and governance. It seeks to simplify and evaluate the complexities in local governance practice and promote the ethos of transparency and accountability.

The EoLI encapsulates the outcome indicators while the MPI captures the enabling input parameters. These indices provide a holistic assessment of cities based on their efforts to cultivate better quality of life, create infrastructure, and address challenges of urbanization.

Infact, MPI provides a granular understanding of a municipalities’ functionalities and the extent of their development and capabilities. Through the index, citizens can better understand their local government administration, which in turn builds transparency and generates trust among key stakeholders.

Bangalore and Shimla have figured on top among big and small cities, respectively.