Socially conscious from an early age, Insha Mir of Downtown’s Safakadal neighbourhood wanted to do something to save the traditional Kashmiri handicrafts and help the artisans earn a decent livelihood.

However, it was only after Insha received the Naropa Fellowship that she became clear about how she will fulfil her goal. The fellowship is a yearlong residential postgraduate programme by Pel Drukpa Charitable Trust in Hemis, Ladakh, aimed at creating agents of change who will work towards fostering an ecosystem of entrepreneurship and growth while preserving the cultural heritage of the Himalayan region. 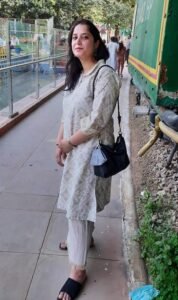 During her fellowship time, Insha devised a sustainable eco-friendly social entrepreneurship project, EcoKash that not only won her accolades but was recognised as one of the best startup ideas. While the idea was conceived in January 2021, it took a lot of brainstorming and footwork to launch the EcoKash in October 2021.

Using skilled craft workers, particularly women, EcoKash, a sustainable fashion business, seeks to protect the authenticity of Kashmiri clothes and declining handicraft traditions. In an effort to contribute her bit to the environment, Insha decided to go completely green.

“During the Naropa Fellowship, I was introduced to organic fabrics, so I opted to go with the possibility of doing both organic fabric and handicrafts,” says Insha.

Her startup idea got its first recognition during her Naropa Fellowship when she pitched it to the CEO of Oyo, Ritesh Agarwal. Of the 50 ideas, presented to Agarwal, EcoKash was one among the four startups, which won the non-equity grant and Oyo backing.

“Small towns in India will write the next chapter of India’s startup story & I am delighted to extend my support to this momentum, through an initial pledge of Rs1 crore equity-free grant & mentorship to grassroots entrepreneurs across India, starting with 4 fantastic startups from the Naropa Fellowship,” Tweeted Agarwal. The four firms that received the Rs1crore non-equity grant included, EcoKash, The Himalayan Chocolates, Zarin and My Pahadi Dukan.

“It was a big boost. If Ritesh Agarwal, a young Indian billionaire saw the potential in EcoKash and kick-started it, others will too recognise it eventually,” says Insha.

Presently in addition to Insha, roughly 20–30 skilled artisans operate as part of the project-based workforce at EcoKash, a social entrepreneurship venture. Mainly, EcoKash works with women artisans for their empowerment but at the same time, it doesn’t sideline the male artisan, it usually has a ratio of 60:40. Organic fabrics, natural dyes, and hand embroidery are the focus of EcoKash.

“We provide fair labour charges to artisans, that is why they are very interested in working with us,” says Insha.

EcoKash has basically come up from two words: eco means environment friendly and Kash stands for Kashmir. EcoKash seeks to preserve the environment while reviving the struggling Kashmiri handicraft industry.

“I wanted to create an impact for the people as well as for the environment so I thought clubbing both together,” says Insha. 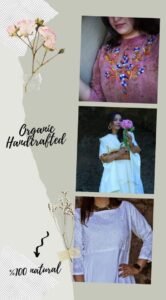 The primary goal is to highlight the native handicraft (Tilla, Aari, and Sozni) art and add a contemporary twist to gain attention and acceptance from the global market. To strengthen the skills of local women artisans, EcoKash takes opportunities presented by the handicrafts industry to revive this underpaid art form on a global scale and earn it the recognition it deserves.

Insha, a convergent journalism pass out from CUK, has forsaken her upcoming job in Bangalore Media College to focus on business. A full-time fashion enthusiast with experience in media and branding enjoys experimenting with fabrics and designs.

People quickly purchase the EcoKash brand because of its low pricing. People mistakenly believe that organic clothing is expensive, but they are quite affordable, according to Insha. EcoKash has an online presence everywhere.

“There are some clothing lines that we must import from other places like hemp, which requires labour and money, therefore they are slightly costly but not overpriced,” says Insha.

EcoKash is also trying to incorporate Papier Mache accessories as well, it is working on the revival of it as well. It is not only restricted to women but it deals with men’s and kids’ apparel as well.

The business, EcoKash was not set up to lure money or make huge profits but to be able to revive the lost artistic tradition, with the aim to save the environment by helping in the upliftment of skilled artists to earn money, says Insha.

“We were shocked by the response we got in Kashmir, we were only three days born at an exhibition and people actually bought good amounts of products there,” says Insha.

“We have ample of loyal customers, and we want EcoKash to reach every household,” adds Insha. EcoKash is sourcing organic fabrics with authentic handmade handicrafts (Tilla, Sozni, Ari). Fabric is usually white or greyish in print, and EcoKash dyes it naturally with no chemicals. It works with numerous fabrics which include: organic cotton, organic cotton corduroy, recycled cotton, Khadi handloom cotton and handloom cotton in the greyish finish( which doesn’t need dye or natural printing).

The EcoKash has incorporated natural dying with these fabrics, a printing pattern is created from these plant-based dyes. EcoKash does everything in Kashmir itself. It wants to give different tastes and styles to consumers with Kashmiri’s traditional touch. The designs and motifs in it have intricate traditional Kashmiri roots. EcoKash is a first step in addressing the problem of how every synthetic and polyester ends up in landfills and harms the environment.

She urged people to stop wondering and start doing things if they want something in life.

“EcoKash is more of a heart work than hard work,” she signs off.