New Delhi, Jan 31: CBI has arrested the Deputy Director of the Jammu regional office of the Employees’ State Insurance Corporation for allegedly receiving a bribe of Rs 50,000 for helping lower a complainant’s penalty amount from Rs 23 lakh, officials said Saturday.

Darabara Singh, who is also in-charge Regional Director, was nabbed on a complaint of a private security firm employee and the owner who had received a notice from ESIC office for improper papers, they said.

On knowing this, the complainant and the owner, both visited the office of ESIC to meet Deputy Director.

During the meeting, the Deputy Director, ESIC, allegedly told the complainant that their papers were not proper and ESIC would impose a penalty of Rs 23.90 lakh on them and if they would pay him a bribe of Rs 2 lakh, he can reduce the penalty amount, CBI Spokesperson RC Joshi said.

After negotiation, they were told to pay the bribe in four instalments of Rs 50,000 each, he said.

The CBI acted on the complaint and laid a trap where Singh was caught red-handed receiving the bribe instalment, Joshi said.

Searches were conducted at the premises of accused in Chandigarh, Mohali & Jammu which led to the recovery of cash of Rs 7 lakh and documents related to properties, he said. (PTI)

Bid to be invited soon for disinvestment of the PSU

SRINAGAR: J&K Government has approved a proposal for the privatisation of JK Cements Ltd, a public sector undertaking of Jammu and Kashmir incorporated in 1974.

It said the disinvestment in the JK Cements Ltd was necessitated as the company was not able to sustain and manage its finances properly and maintain efficiencies of operations over the period of time.

The company was also not able to fully exploit the potential and sustain stiff competition in the market despite having dedicated limestone mining leases at its disposal.

Inspite of enjoying economy of scale, the company failed to show requisite growth and generate cash flows and operating margins during the last more than two decades.

The company despite having assured demand from the Government against advance payments has not grown even marginally over the long period of time and has rather shown sharp decline in its production and revenues from 2012-13 on wards. Managerial and financial inefficiencies, coupled with failure to exploit locational advantage, has made the company defunct further depreciating plant and machinery without any resultant productivity.

The company had not only accumulated losses but is also burdened with liabilities on account of salaries and outstanding wages and payments in addition to default in statutory deductions like CP fund, GST etc.

Earlier also the Administrative Council vide its decision No. 113/15/2021 dated 19.10.2021 had given in-Principle approval for complete sale of JK Cements Ltd by exploring the option of ascending e-auction and an authorization to utilize 240 kanals of land adjacent to Khrew Plant at Industrial Estate.

The Interested Bidder should have a Minimum Net-worth of Rs 250 Crore. The Interested Bidder should have a net positive EBITDA in at least three out of the immediately preceding last five financial years. Eligible Entities are permitted to form a Consortium to participate in the Transaction. The maximum number of members, including Lead Member, in a consortium can be four.

Key principles and actions underlying the recommended disinvestment modality includes 100% ownership in JKCL in favour of a private company/consortium. Further all the assets of JKCL on an as-is-where-is basis, along with approvals and licenses (including mining license) will be transferred as part of the share purchase sale.

It was further decided that the Government of J&K will take over all employees of JKCL and the Acquirer will be responsible for staffing requirements to get the plant operational. Moreover all legacy and material liabilities will be carved out and assigned to the Union territory.

All the pre-bid requirements including renewal of lease in favour of the Corporation, power availability, finalization of accounts and their audits etc. shall be completed before the start of auction process. While disinvesting, it shall be ensured that the provisions of Mines and Minerals (Development and Regulation) Act, 1957and rules framed there under are not violated in any case. It was also decided that the process of reverse auction will be adopted for the purpose of disinvestment. Srinagar, Sept 26: The apex trade and industry body of the country Federation of Indian Chambers of Commerce and Industry (FICCI) here on Monday organised an awareness workshop on ATA Carnet and its operational aspects for exporters and importers of J&K.
The workshop was held in collaboration with the Kashmir Chamber of Commerce and Industry (KCCI).
ATA Carnet ‘facilitates green channel route for doing business in India and abroad’. Also known as ‘Passport for Goods’, it is an international customs document that permits the tax-free and duty-free temporary export and import of nonperishable goods for up to one year. 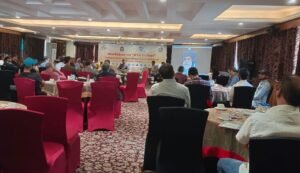 The event provided an opportunity for exporters, importers and business experts to share their mutually beneficial knowledge and experiences. They discussed issues involved in the temporary import of goods and drew benefits from the deliberations of the session. The experts and guests interacted with the workshop participants on ATA Carnet and responded to several queries while clarifying doubts about the operational aspects of ATA Carnet.
Divisional Commissioner, Kashmir, Pandurang K Pole, in his address, said the ATA Carnet should be promoted with the ‘One District One Product initiative’ of the Government of India to reap its benefits for exporting local produce.
Deputy Commissioner of Customs, Srinagar, Danish Inder Singh Gill said, “It is right to call ATA Carnet as FICCI Green Channel Route to make it more popular with the business community in India”.
Director, Handicrafts & Handloom, Kashmir, Mehmood Ahmad Shah, talked about the initiatives, issues & challenges of the Handicrafts & Handloom sector of Kashmir. 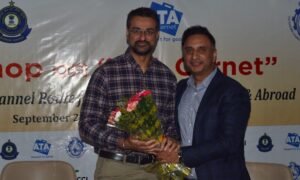 Highlighting the importance of the workshop for the local export community, Chairman FICCI Jammu & Kashmir, Irfan Ahmad Guju, in his welcome remarks, said it is an initiative in educating people on the use of ATA Carnet and appreciating the value it brings to the export community”.
President, KCCI, Sheikh Ashiq Ahmad, also spoke at the occasion. Senior Consultant, FICCI & Former Member Customs Excise & Service Tax Appellate Tribunal (CESTAT), PS Pruthi; Deputy Secretary General, FICCI, Nirankar Saxena; and Co-Chair, FICCI Jammu & Kashmir, Rajesh Sharma interacted with the participants of the workshop and responded to several queries to clarify doubts on the operational aspects of ATA Carnet.
Carnets are like passports for goods replacing normal customs documentation enabling fast trouble-free importation into member countries without having to pay duty or tax. The system gives a number of advantages to businessmen seeking new opportunities on foreign markets. It can benefit business travellers, sales executives, fair exhibitors, film and tv crews, artists, engineers, educationalists, entertainers, sports teams and many more during their overseas trips.
The key benefit is that it can be used for multiple trips throughout its one-year validity. It reduces delays and standardises procedures that are vital in today’s economic world. In addition, it significantly simplifies customs paperwork.
FICCI has been functioning as the National Issuing & Guaranteeing Association (NIGA) for the operation of the ATA Carnet system in India.