Srinagar, Jan 21: Vice-Chancellor of University of Kashmir Prof Talat Ahmad on Thursday chaired a meeting of top varsity officers to finalise the implementation of the newly-developed Administration Management System (AMS).

The AMS, designed and developed by the varsity’s Directorate of Information Technology and Support System, aims to consolidate data pertaining to employees, departments, and positions while facilitating online submission of proposals and approvals thereof.

The AMS, Prof Talat said, was the need of the hour to further boost the efficiency of the university system.

“The more we facilitate the introduction of technology into our systems of governance and functioning, the better the results and outcome would be,” he said, asserting that the AMS modules include HR Management, Leave, Budget, Salary, Attendance, and e-Notes.

The Vice-Chancellor directed the early processing and import of data from various administrative and academic sources into the AMS to enable its timely implementation.

Currently, the data from sources like Salary, Budget, and DIQA has already been processed and imported into AMS.

The Directorate of IT and SS has also developed the KU Accounts Management System (KUAMS) to deal with all accounts and budget-related activities through the e-governance application.

KU Registrar Dr Nisar Ahmad Mir said the AMS as well as the KUAMS—apart from its existing modules—will have a scope for inclusion of more modules as per the needs and requirements of the university system.

“This IT-enabled system will be user-friendly and further enhance decision-making, disposal of cases, the release of payments and sanctioning of leaves, etc.,” he said.

He said offices in the Registry will be directed to ensure timely implementation of the AMS for the welfare of all stakeholders of the university.

In-charge Director IT and SS Dr Maroof Naieem Qadri and his team of IT professionals gave detailed power-point presentations about the AMS and KUAMS. The COVID19 pandemic – perhaps more than any other event in human history – has demonstrated the critical importance that telecommunications infrastructure plays in keeping businesses, governments and societies connected and running. Due to the economic and social disruption caused by the pandemic, people across the globe rely on technology for information, for social distancing and working from home.

The telecommunications sector has seen tremendous importance and technological advances over the past few decades, with mobility, broadband and internet services growing in capability and reach across the globe. The International Communication Union (ITU) estimates that there were over 4 billion internet users at the end of 2019. The telecommunications industry consists of digital infrastructure such as fibre, towers, active networks, telephony, video and e-commerce services, etc. The sector has remained ‘mission-critical’ to keep economies moving under the lockdown in at least three different ways:

3) Keeping individuals and societies connected and informed with access to medical, financial, commercial, and other essential services during isolation

Many telecom players – from broadband to mobile to data centre operators – have benefitted from a surge in the traffic of data and voice, as a result, the telecommunications sector performed well compared to other sectors during the COVID19 pandemic. In sharp contrast to many other industries, the telecommunications sector was exempted from main Covid19-related restrictions such as stay-at-home, quarantine requirements and so on and was recognised as an essential service. Some telecommunication companies have been strengthened by the short-term spike in data traffic and increased use of broadband and internet services, as more people were working from home and relied on video meetings. As a result, the telecom sector remained acyclic throughout the crisis.

The long-drawn pandemic has taken its toll on telecom sales and distribution networks, especially considering that the footfall of customers at direct franchises has been a major revenue source for the longest time. In many regions, the telecom sector is still reeling from the social distancing measures which has caused an abrupt disconnect between the retail Point of Sale (POS) and subscribers.

As the pandemic restrictions loom over telecom operators, they experience a growing need to develop a robust digital ecosystem, the vulnerability in their existing systems. In an effort to stay resilient in the face of future inevitable events, like the COVID19 pandemic, it is pivotal for telecom companies to increase investment in digital transformation solutions for S&D. Even though many telecom companies are moving towards digitization to bounce back post- COVID19, the inconsistency and lack of synergy in overall sales and distribution (especially across direct and indirect channels) has impeded their growth.

The author is a PG student of economics at HNB Garhwal Central University Uttrakhand. He can be reached at iqbalmarazi999@gmail.com Srinagar, Aug 29: A Kashmir-based startup idea ‘SmartFish’ which aims to automate aquaculture with the help of IoT, has been declared the winner at the national level ‘Big Fish Pool’ startup event and has been awarded Rs3.5 lakh grant.

Falak Jan and Naveed Hamid from Sher-e-Kashmir University of Agricultural Sciences and Technology of Kashmir have not only successfully defended their idea but have received an open offer grant extendable upto Rs 15 lakh for its expansion.

‘The Big Fish Pool’, a significant national startup event, was organised by CT University (CTU) and associated partners in an effort to bring together young entrepreneurs from various across the country. It assisted prospective young entrepreneurs in pitching their ideas to venture capitalists and investors, who evaluated them and provided the young business owners with financial support. 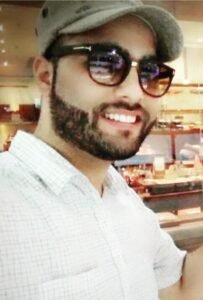 Falak Jan and Naveed Hamid’s, ‘SmartFish’ successfully defended the Investors Meet to Secure  Rs3.50 lakh for their idea during “The Grand Big Fish Pool” by Startup Punjab, CT University, and several other investors. The AI-driven, BlackEye Technology acknowledged the concept behind ‘SmartFish’ and immediately pledged financial support of Rs3.50 lakh and more in the future.

A SmartFish: What Is It?

The concept behind SmartFish is to revolutionise aquaculture by using IoT (internet of things) sensors to automate every aspect of a fishpond. Remote control will be used to control everything.

The device will assist the fishermen in a number of ways, including controlling fish feeding and monitoring temperature and oxygen levels. Additionally, it can aid in monitoring outdoor activities involving ponds. Fishermen will have total control over every aspect of fish. The shelves will be created to look towards any untoward happing in the water. The SmartFish team will receive mentoring support from The Big Fish Pool as well. The team first requested a Rs3 lakh investment, but more was given as a result of the presentation of the original idea. Additionally, if the team needs more funding to scale out the technology, they will be provided with any amount up to Rs15 lakh.

It’s a necessary practice for the fisheries sector in the modern day; this model is needed in Maharashtra, Gujarat, Punjab, etc. for the development of the sector.

The team is also working on their next models that will focus on agriculturally related activities, particularly on unexplored concepts, giving fisherman AI-based devices that will do the work in a matter of seconds and separate the waste in the boxes. This is known as the idea of “Waste Wealth” where technology is utilised to extract valuable resources, recycle waste, and generate electricity

The J&K UT, the customer, and the vendor will all profit from this. The idea is that this device will be 1 foot tall, lightweight, and powered by DC (Direct Current) and sensors. “We are looking forward to making it possible here, it is already available in some areas outside India,” Naveed said

Naveed Bhat and Falak Jan expressed their gratitude to the SKUAST-K authorities, in particular Vice Chancellor Nazir Ahmad Ganai, for their guidance, inspiration, and support.

Among the 300+ national teams that were selected for investment, Team SmartFish was chosen by eminent investors from across the country. Of the 40 teams that made the shortlist, only three received funding for the investment, including SmartFish. In May 2022, the registration process was completed. Additionally, SmartFish won ‘Skils Panacea’,  where they gave the winning team a startup foundation course worth  Rs85,000. 2-day event to be held jointly with KU, IIT Kanpur

The conference is being organised as part of the Scheme for Promotion of Academic and Research Collaboration (SPARC) programme, Ministry of Education (MoE), Government of India, that aims at improving the research ecosystem of India’s higher educational institutions. Department of Science and Technology, GoI & World Bank-ICAR funded National Agricultural Higher Education Project for the institutional development of SKUAST-K are also supporting the event.

Department of Biological Sciences and Bioengineering, IIT Kanpur; Division of Animal Biotechnology, SKUAST-K; and Centre for Interdisciplinary Research and Innovations, KU are jointly organising the event to be held at SKUAST-K, Shalimar campus and KU campus, Hazratbal on May 6&7 respectively.

To review the preparations for the international conference, a meeting was held at SKUAST-K under the chairmanship of Director Research, Sarfaraz Ahmad Wani and Dean Faculty of Veterinary Sciences, MT Banday in which scientists, faculty members and organisers of the conference participated.

The mega-conference is being held under the patronage of VC KU Prof Talat Ahmad and VC SKUAST-K Prof Nazir Ahamd Ganai. Prof Ganai, in his message, highlighted the importance of the conference in the present scientific era and hoped that it will provide an opportunity to discuss and deliberate on the issues shared across related fields concerning the improvement in life and working of mankind.

The RABSRM 2022 conference aims to bring together experts, researchers, young scientists and academicians from around the world to disseminate knowledge from interdisciplinary backgrounds. The knowledge provided by the eminent speakers and researchers will help to foster the research culture in the area of biomedical sciences and regenerative medicine at the universities of Jammu and Kashmir and around the country. The conference will provide an opportunity to discuss recent developments in biomedical research in health and diseases and foster future directions in drug discovery and therapeutic interventions. The themes of the conference include Bioengineering, Regenerative Medicine, Cancer Biology, Drug Design and Delivery, Vaccine Biology, Tissue Engineering, Biomaterials, Molecular Therapeutics, Animal Biotechnology, Stem Cell Gene Therapy & Biomarkers.

The conference solicits contributions of abstracts for oral/poster presentations that address themes and topics of the conference. Participants are required to submit their research abstracts online. Students/Postdocs/Faculties can submit abstracts describing original and unpublished results in all the areas of Biomedical Science and Medicine and are invited for the presentation at the conference after the acceptance. The template of the abstract can be found on the website: www.rabsrm.org. Among the leading National and International scientists participating in the two days event include the names of Jukka Seppälä from Aalto University, Finland, Andreas Nüssler from Univesity of Tuebingen, Germany, Jouni Partenan Aalto University, Finland and Hanna Isaksson from Lund University, Sweden as Key International Invited Speakers for the event.

The event will be one of its rear kind in this part of the world where the professionals across diverse disciplines will be deliberating on the theme interrelated across all the steams of concern. The event is expected to host renowned professionals from various national and international organisations for the two days here at Srinagar.