Srinagar, Nov 27: To curb the menace of spurious pesticides and fungicides, J&K Government will set up testing laboratories for quality checks of the chemicals used for the prevention of plant diseases, like apple scab.

The decision was taken during a meeting held to review the quality of pesticides being provided to farmers, according to an official spokesperson.

The meeting discussed public complaints regarding the supply of substandard pesticides and fungicides to the orchardists and farmers that is believed to be the reason for scab disease which affected the quality of apple and its production.

During the meeting, it was decided that testing laboratories certified by NABL shall be established to check the quality of pesticides being imported and supplied to farmers. Moreover, the upgradation of existing labs was also discussed.

Meanwhile, Principal Secretary directed officers that procurement of pesticides should be done in advance so that testing of pesticides and results could be made available in time.

Earlier, Principal Secretary held a meeting, regarding Poultry and Spice processing enterprises, with the unitholders.

The meeting was attended by Director Animal Husbandry, Director Industries and Commerce, poultry farm and processing entrepreneurs besides spice unitholders.

The meeting held a threadbare discussion on the issues pertaining to the poultry industry and its promotion. The programme was organised to acquaint the students with various concepts of innovation, startups and entrepreneurship. 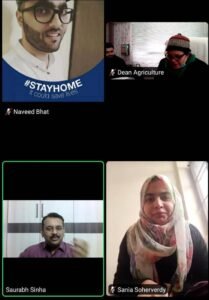 The webinar was conducted by the university’s Faculty of Agriculture under the World Bank-ICAR funded National Agricultural Higher Education Project (NAHEP) for the institutional development of SKUAST-K.

Startup coach and Managing Partner of REIN Labs – Mumbai-based innovation, incubation and research organisation – Saurabh Sinha was the main expert of the webinar, who dwelled in detail about the transformation of an idea into a startup or business in particular reference with agriculture.

Sinha in his talk said that there is a need to invest in fundamental research and focus on innovation as growth levers. “We need to create products, services or solutions out of our innovations that solve global as well as our local problems,” he said.

He said students need to be oriented in a way that use their time during graduation doing projects, prototypes and products addressing real life social problems.

Besides the Faculty of Agriculture staff and team IDP-NAHEP, more than 90 students participated in the webinar. Seeks use of cardboard manufacturing infrastructure created by private players

Srinagar, Jan 17: Federation of Chamber Industries Kashmir (FCIK) has demanded that government should support the existing unit holders to fulfil the demand of the packaging and has taken a strong note of the government’s plan to establish 40 MT integrated packhouse at Doabagh Sopore, as it seems that government is giving birth to one more loss-making PSU. On the one hand, the government is planning to disinvest the PSU’s and establishing of the new one seems to be a disaster and repetition of the government mistakes which is unwarranted.

In a statement, FCIK President Shahid Kamili said the establishment of a packhouse by the government at Sopore will deal a severe blow to the existing pack houses established by local entrepreneurs. Kamili said there is no need to establish additional facilities when private entrepreneurs have already established around 150 state-of-art corrugated cardboard manufacturing facilities worth Rs 750 crores at various places catering to the Valley’s horticulture produce successfully.

It said the existing installed capacity of packaging products is more than the demand of the horticulture crop from the Valley and the additional facility by the government would also be a loss-making unit.“It seems that the government has not learned from its various loss-making PSUs. This facility would not only prove white elephant for the state exchequer but will also destabilise facilities put up by the local entrepreneurs. The non-functioning of the Government PSUs have proved that the PPP models have failed. Government should instead help the existing units to give a fillip to the private sector,” said FCIK.

Stating that the packing industry is already saturated and ruthless competition has pushed the existing units to the wall, the FCIK demanded that such line of activity should not be encouraged and instead existing units should be further augmented with Government hand-holding and capital infusion. FCIK said the existing units provide employment to around 2500 youth directly and 10000 indirectly who will also stare at expulsion if a government facility comes up.

FCIK further said Government should address other important issues including the tax evasion of the horticulture packaging products coming from outside J&K which have affected the local horticulture industry badly.

In this regard, the FCIK has urged the government to impress upon the Jammu and Kashmir Horticulture Planning and Marketing Corporation to cancel the tender inviting bids for the construction of 40 MT integrated packhouse at Doabagh Sopore and also sign MoUs with existing units so that government provides them with the marketing support to their business venture. Government should take local industry leaders on board before making such decisions as the local unitholders are aware of the current industry status and how it can be promoted. As the current supply from the existing units is enough and as per the required standards which is needed to be augmented by the government hand-holding and demands marketing support. The training was organised by the university’s Research Centre for Residue and Quality Analysis (RCRQA under the World Bank-ICAR funded National Agricultural Higher Education Project (NAHEP) for the institutional development of SKUAST-K.

The inaugural session of the training was attended by HODs, scientists and faculty members of various divisions of the university.

Director Planning and Monitoring and PI NAHEP, Prof Nazir Ahmad Ganai,  while addressing the trainees emphasized the need for skill development of the young generation for improving their employability and establishing their own startups for job and wealth creation. He highlighted the relevance of residues analysis in agricultural produce for securing the health of the consumers and facilitating the trade of agri-produce after proper certification.

Incharge of RCRQA Lab Prof Ashraf Alam Wani while welcoming the guests and participants gave the details of the 10-day training. Director Education, Prof MN Khan highlighted the new education policy 2020, and its relevance with the training. Twenty trainees from different institutes of the Kashmir division are participating in the programme.